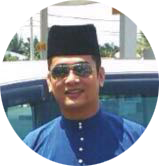 Mr. Wan Jusaini Rizal bin Wan Nasruddin is the State Director of SME Corp Johore. He was born in Pekan Pahang. He received his Bachelor Degree from UNITEN in Mechanical Engineering. Prior to that, He obtained his early education in Sek Ren Taman Selayang and Bangkok Patana School from 1987 to 1989. He then pursued his secondary school in Sek Men Tengku Abdullah Pekan and Royal Military College in Sungai Besi. He is married and has 3 children. During his leisure time, he enjoys playing sport and guitar.

His involvement in Small and Medium Industries was traced back in 2000 when he embarked his career as the Assistant Manager in the Technical Department of SME Bank. After serving for more than 8 years in the Bank, he was assigned to lead a project in UKM for a bout year.  He joined SME Corp of Johore in 2011 and was promoted as the State Director in 2014 until present where he is actively involved in dealing with entrepreneurs and helping them by organizing entrepreneurship programs particularly in Johor.